The matrices and determinants are used in the field of Mathematics, Physics, Statistics, Electronics and other branches of science. The matrices have played a very important role in this age of computer science.

The idea of matrices was given by Arthur Cayley, an English mathematician of nineteenth century, who first developed, “Theory of Matrices” in 1858.

and then enclosed by brackets ‘[ ]’ is said to form a matrix

We term the real numbers used in the formation of a matrix as entries or elements of the matrix. (Plural of matrix is matrices)
The matrices are denoted conventionally by the capital letters A, B, C, . . ., M, N etc. of the English alphabets.

Rows and Columns of a Matrix

It is important to understand an entity of a matrix with the following formation.

In matrix A, the entries presented in horizontal way are called rows of matrix. 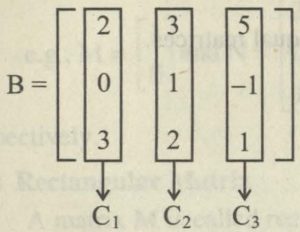 In matrix B, all the entries presented in vertical way are called column of matrix.

Order of a Matrix

The number of rows and columns in a matrix specifies its order.

If a matrix M has m rows and n columns, then M is said to be of order m-by-n.

is of order 2-by-3, since it has two rows and three columns, whereas the matrix