A body is said to be vibrating if it moves back and forth or to and fro about a point. Another term for vibration is oscillation. A special kind of vibratory or oscillatory motion is called the Simple Harmonic Motion (SHM).

Some examples of Simple Harmonic Motion (SHM) are:

Motion of mass attached to a spring

One of the simplest types of oscillatory motion is that of horizontal mass-spring system as shown in the figure below: 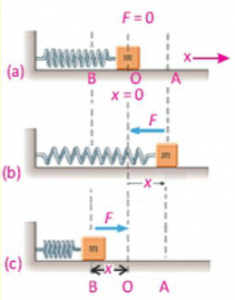 SHM of a mass-spring system

If the spring is stretched or compressed through a small displacement x from its mean position, it exerts a force F on the mass. According to Hooke’s law this force is directly proportional to the change in length x of the spring i.e.,

where x is the displacement of the mass from its mean position O, and k is a constant called the spring constant defined as:

It means that the acceleration of a mass attached to a spring is directly proportional to its displacement from the mean position. Hence, the horizontal motion of a mass-spring system is an example of simple harmonic motion.

This process is repeated, and the mass continues to oscillate back and forth about the mean position O. Such motion of a mass attached to a spring on a horizontal frictionless surface is known as Simple Harmonic Motion (SHM).

The time period T of the simple harmonic motion of a mass ‘m’ attached to a spring is given by the following equation: